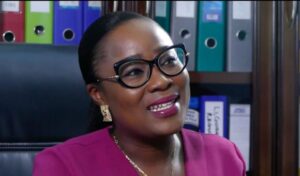 The Food and Drugs Authority (FDA) has sacked its Head of Legal, Cynthia Dapaah-Ntow following a charge of misconduct leveled against her.

In a memo sighted by myjoyonline.com, the management of the Authority informed its staff “that effective May 18, 2021, Mrs. Cynthia Dapaah-Ntow, Head of Legal, will cease to be a staff of the FDA.”

It explained that “The decision was arrived at after Mrs. Cynthia Dapaah-Ntow was taken through the internal disciplinary process of the Authority, following a charge of misconduct levelled against her.”

The FDA lawyer sued Manasseh Azure Awuni and two others last year alleging she has been defamed and is seeking to stop the broadcast of the investigative piece, “The Returned Bribe”.

In the documentary, she was heard on tape demanding bribe from COA FS manufacturer, Prof. Ato Duncan.https://1e81a054de71be4b8b6d68245b4f1352.safeframe.googlesyndication.com/safeframe/1-0-38/html/container.html

Following an investigation by the Authority, its Disciplinary Committee recommended to the Board that the appointment of Mrs. Cynthia Dapaah-Ntow be terminated.

The memo said, “The Board has subsequently accepted the recommendation and given her the required notice of termination of appointment.”

According to the management, “the Investigative Committee exonerated the CEO of all allegations of wrong doing on her part.”

It further thanked all its staff for their patience while the disciplinary process lasted.https://1e81a054de71be4b8b6d68245b4f1352.safeframe.googlesyndication.com/safeframe/1-0-38/html/container.html

It added, “As a matured regulatory agency whose core values include transparency, fairness, and integrity, the Authority reiterates its zero-tolerance for bribery and corruption and reaffirms its commitments to the staff.”

In November 2020, Mr Azure Awuni released an investigative report titled “The Returned Bribe” in which the CEO of the COA FS food supplement, Prof. Samuel Ato Duncan, alleged the FDA attempted to extort money from him when his product gained popularity in the wake of the Covid-19 pandemic.

This happened at the same period FDA, in April 2020, suspended the production license of COA FS, citing breaches in safety protocols.

The CEO of COA FS said he suspected foul play in the FDA’s approach and contacted the Head of Legal to complain and seek advice on how to handle the situation.

According to him, it was at a meeting to discuss the issues that Mrs. Dapaah-Ntow demanded the money.

Mrs. Dapaah-Ntow later called him to come back for the money because the CEO of the FDA had rejected the money.

In that phone conversation, which was recorded, Mrs. Dapaah-Ntow is heard arguing with Professor Samuel Ato Duncan that the agreement was to give both the CEO of the FDA and her (the Head of Legal) $100,000 each. She said her cash of GHC100,000 was far less than the amount agreed.

“And we said okay bring her $100,000. And I asked you a specific question; [about mine] how much? Then you said the same amount,” she is heard in the audio.

Asked why he gave the money knowing that it was illegal to pay a bribe, Prof. Duncan said he suspected foul play and decided to play along.

He added that in the process, he was in touch with the Greater Accra Regional Director of the National Bureau of Investigations (NIB), whom he fed updates of the scheme including exchanges between him and the Cynthia Dapaah-Ntow.

Injunction and Defamation Suit and Dramahttps://1e81a054de71be4b8b6d68245b4f1352.safeframe.googlesyndication.com/safeframe/1-0-38/html/container.html

The radio version of “The Returned Bribe” documentary was aired on the Super Morning Show of Joy 99.7FM on November 12, 2020, and the television version was billed to be broadcast later that night.

Mrs. Dapaah-Ntow, however, applied for an injunction against the broadcast of the television documentary. She also sued Manasseh Azure Awuni, Professor Samuel Ato Duncan and The Multimedia Group for defamation.

In January 2021, lawyers for Mrs. Dapaah-Ntow had asked the court to reject Manasseh’s entry of appearance and statement of defence because they claimed Manasseh had failed to provide his residential address.

The court dismissed their application, stating among other things that the plaintiff had not had any problems with serving any of the processes on Manasseh.https://1e81a054de71be4b8b6d68245b4f1352.safeframe.googlesyndication.com/safeframe/1-0-38/html/container.html

Unsatisfied with the ruling, Cynthia Dapaah-Ntow appealed at the Court of Appeal.

The lawyers for Manasseh and the Multimedia Group led by Samson Lardy Anyenini, repeated their stance that the numerous actions by Mrs. Dapaah-Ntow were only meant to delay the hearing of the substantive injunction application, a charge lawyers for Mrs. Dapaah-Ntow took a strong exception to, leading to heated exchanges in the court.

The injunction was supposed to continue at the High Court on March 30, but the docket had not been brought back from the Court of Appeal so the case has been adjourned to May 11, 2021.