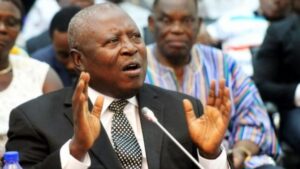 Former Special Prosecutor, Martin Amidu says Ghanaians must be worried that they are being forced to accept Legal Practitioner and Chairman of the Electronic Communications Tribunal, Kissi Agyebeng as the next Special Prosecutor.

According to Mr. Amidu, the 43-year-old lawyer is a surrogate of the “ alter ego” of Africa Legal Associates, a firm founded by the President’s cousin, Gabby Asare Otchere-Darko.

In a 3-paged write up sighted by JoyNews, the citizen vigilante accused Mr. Otchere-Darko of using his radio station, Asaase Radio, and other platforms to leak the nomination of Mr. Agyebeng and spread falsehood about him so as to pressurise President Akufo-Addo into approving him.

“It must, therefore, be worrying to any patriotic Ghanaian not afraid of the culture of silence to see Asaase Radio undertaking political propaganda beginning on 25th April 2021 to 26th April 2021 to prepare the minds of the Ghanaian and international public to accept the surrogate of the alter ego of the Asaase Radio station and Africa Legal Associates as the Special Prosecutor as mandated under section 4(1) of the Office of the Special Prosecutor Act, 2018 (Act 959),” he added.

The concerns by Mr. Amidu follows the nomination of the lawyer by Attorney-General, Godfred Dame on Tuesday. In his memo addressed to the President, Mr. Dame said the nomination was in line with section 13 (8) of the Office of the Special Prosecutor Act, 2017 (Act 959), which states that “when the position of the SP becomes vacant, the President shall, within six months, appoint another qualified person for that portfolio.

But commenting on this, Mr. Amidu insists that the Attorney-General nominated Mr. Agyebeng due to their personal relationship as friends and former classmates.

“Asaase Radio should also have told the Ghanaian and international public that its surrogate and nominee Special Prosecutor in the published letter is a personal friend and classmate of the Attorney General, and the owner of Asaase Radio all of whom attended the University of Ghana’s Faculty of Law and Ghana Law School.

“The independence of the Special Prosecutor from the direction or control of any person or authority in the performance of the functions of his office are the operative statutory words for the nomination of an impartial Special Prosecutor! Not a word with an “ism”.

The former Deputy Attorney-General also added that he was interested in how corruption cases will be independently and impartially handled by the new Special Prosecutor due to his role as counsel for some of the individuals and institutions engaged in the alleged corrupt acts.

“Asaase Radio and the nominator of the proposed new Special Prosecutor know or ought to have known the extent of the involvement of their surrogate as a lawyer for suspects in pending suspected corruption cases in which the Government showed an undue interest in the Office of the Special Prosecutor which I await to see how independently and impartially those cases will be handled to conclusion should the President submit the name of the nominee to Parliament, he is approved, and then appointed,” he said.